Bees play a major role in the production of many seed crops grown in Central Oregon, including carrots, onion and alfalfa. Farmers depend upon the bees to pollinate their fields. The majority of the bees supplied are honeybees. However, farms use leaf cutter bees in alfalfa seed fields. Bees are brought into the fields in early summer and are removed at summer’s end. Bee keepers check up on the honeybees when they are in the fields, but farmers are solely responsible for taking care of their leafcutter bees during pollination. 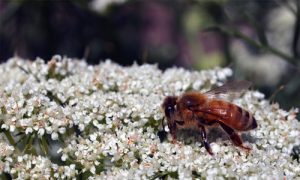 There are three different castes in a honeybee hive; the queen, worker bees and drones. There is generally only one queen bee per hive and she is the only bee with fully developed ovaries. Her main job is to produce more bees. She can lay up to 2,000 eggs per day and usually lives between three and five years. When the queen dies or is no longer able to reproduce, the other bees will select a new queen by feeding young larvae a diet of royal jelly. Royal jelly is a mixture of pollen and a chemical that is secreted from a gland in a nurse bee’s head. It is fed to all larvae for the first few days, but the queen continues to eat royal jelly while developing, making her approximately twice the size of the other bees.

Worker bees are all female and live for four to nine months during the winter and only about six weeks during the summer when they are collecting pollen and nectar. Nearly all bees in a hive are worker bees, with each hive containing approximately 20,000 to 30,000 bees in winter months and up to 80,000 bees in the summer. Worker bees have a barbed stinger that they use when they feel themselves or the hive is threatened. They are only able to use the stinger once, as it results in their death.

Drone bees come from the unfertilized eggs laid by the queen and they are all male. Their sole purpose is to mate with the queen bee. Drones are not useful to the hive in winter months so they are expelled from the hive in autumn. There can be between 300 and 3,000 drones on standby in the summer to mate with the queen. Drones are not equipped with a stinger, but do have a barbed sex organ. They die after mating. 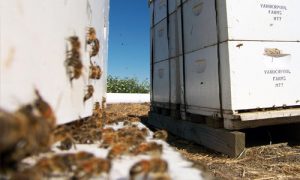 Leafcutter bees are a solitary bee insect, meaning that they do not live in colonies like social insects (honeybees, wasps, ants) and do not store honey. However, they are very efficient pollinators. They are about the size of a honeybee and are somewhat darker in color. Leafcutter bees are not aggressive and will not sting or bite unless being handled. Their sting is much less painful than other bees and wasps. Female leafcutter bees have a stinger, but both sexes prefer to use their mandibles to bite as a defense mechanism. Therefore, the bee suits used with honeybees is not required with leafcutters. 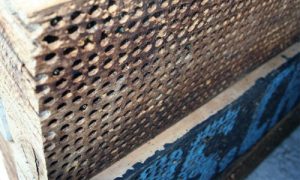 Leafcutter bees are more efficient pollinators than honeybees in alfalfa fields, because of the shape of the alfalfa flowers. Pollination is a byproduct of the honeybee’s visit to the alfalfa flower, where it is actually foraging for nectar. In the process, it accidently pollinates the flower. Leafcutters forage for pollen, making them much more efficient pollinators for alfalfa seed.