Marty and Nancy Richards were no strangers to farm life when in 1989 they purchased 350 acres near Madras and began farming full time. The couple had spent the past ten years on 20 acres outside of Portland, growing hay and raising a few calves. 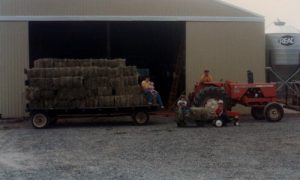 An early farming photo of the Richards when they lived in Sandy, Oregon.

The Richards were joined by kids Gary, Katie and Kevin, who were ages 11, 9 and 6 at the time of the move. The children were active helpers on the farm, picking rock and changing irrigation. While the kids participated in 4-H and FFA, Marty and Nancy became active volunteers, resulting in the family being awarded the Oregon State Fair Farm Family of the Year in 1994. 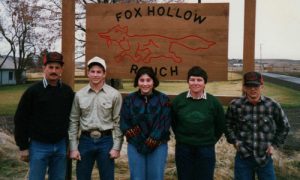 The Richards Family standing outside their farm in Madras, Oregon in the 90s.

Currently, the Richard family grows carrot and grass seed, mint, wheat and hay on 620 irrigated acres. Their interest in sustainable practices has led them to implement technology such as drip irrigation and Scientific Irrigation Scheduling (SIS) to reduce water use. Installing GPS systems on tractors has improved efficiency and reduced fuel consumption. They also use no-till and minimum till in their crop rotation as frequently as possible.

The family’s farming roots still run deep. Eldest son Gary moved with his wife and three girls to a home on the family farm so his children can experience farm life. Kevin, along with his wife and son, has purchased the farm next door and moved back to Madras. Daughter Katie and her husband Brett live just over the mountain in Hillsboro, where she works for Intel. 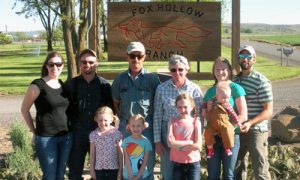 The Richards family at Fox Hollow Ranch in Madras, OR.

In addition to raising three farm-loving kids, the Richards have hosted nine agriculture trainees from Australia, New Zealand, Denmark, England, France and Norway from 1994 to 2002. They provided room and board, as well as a small wage during the trainees’ nine month stay.

The Klann Family comes from a long line of agriculturalists, dating back to the original Luelling family – Quaker plantation owners who also happened to be staunch abolitionists. As the Civil War neared, Henderson Luelling filled a wagon with his family and fruit trees and traveled west, eventually settling in Oregon City where he established the first grafted orchard in Oregon Territory.

In 1904, Henderson’s grandson Seth Luelling took part in the Homestead Act and moved east of the Cascades to establish a farm north of Madras. Life was tough for Madras’ first settlers, but the family persevered, raising cattle, wheat and potatoes. When Seth’s daughter Ellen married local boy Fred Klann, the couple settled on a nearby farm.

The Klann family farm is now owned by Brad Klann, who started farming the 360 acres with his parents. In 1976, they brought the first irrigation pivots to Central Oregon. A large pond was also built to capture water from the neighboring flood-irrigated fields. Today, water efficiency and conservation remain key components of the Klann farm. 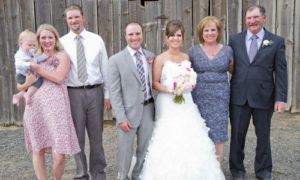 The Klann Family outside the original homestead barn at Travis & Katie’s wedding. 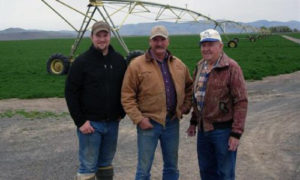 Brad, now joined by his wife Debbie and children, Seth and Katie, began purchasing neighboring acreage, bringing the total to 840. Over the years, the Klanns have raised many crops, including potatoes, alfalfa hay, carrot seed, Kentucky bluegrass, wheat and other specialty grain and seed crops.

In 2011, Seth and his wife Sally purchased the original Seth Luelling homestead that had been owned outside the family for the past 60 years. Today, Brad, Seth and Katie’s husband Travis farm 1080 irrigated acres. Seven generations have grown up on Madras farmland. Seth and Sally’s sons, Jet and Silas, are now the 8th generation of Oregon farmers. 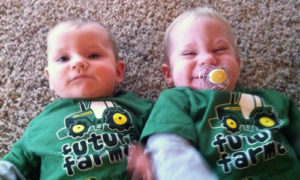 The origin of Macy Farms LLC dates back to 1947, when irrigation was first delivered to Jefferson County and Dwight O. Macy started farming in Culver. Through the years, several generations have followed in Dwight’s footsteps, including grandson Mike. After graduating from Oregon State University with a degree in crop science, Mike returned home to farm full-time. 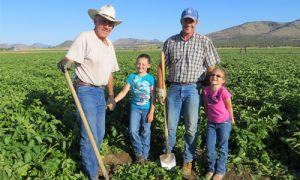 Mike and his wife Milne are now raising the next generation of Macy’s on the farm. They have two daughters, Tegan and Kailee

Jim and Mary Carlson have lived and farmed in the Culver area for 40 years. They are big supporters of their community and the farming industry.

Jim was raised in Culver where his parents, Floyd and Louise Carlson farmed and ran a seed packing business (Round Butte Seed Growers). He worked on the farm alongside his 3 brothers and 3 sisters until after college. Jim farmed with his father until, Floyd, retired in 1977. Floyd and Louise came to Culver from Idaho when the water project came in. They established deep agriculture roots in all their children and three of the Carlson boys became farmers. One son became a professor of Agriculture Economics at North Carolina State, and two of their daughters farmed and ran a potato packing business.

Mary McDonald Carlson, the daughter of Tom and Marian McDonald and the second oldest of 4 brothers and 2 sisters was the 4th generation to be raised on the McDonald ranch in Ashwood. They raised sheep and beef cattle. Mary went to all eight grades of elementary school in Ashwood and didn’t “come to town” for school until her freshman year in high school. As soon as Jim grew taller than Mary (sophomore year), they started dating and were later married in 1976.

Jim and Mary raised their 3 children, Amy, Melissa and Alex in Culver and all were actively involved in 4-H and FFA. They raised pigs, lambs and steers and were competitive in public speaking and leadership events. Showing at the Jefferson Co. Fair was the Carlson kids’ summer vacation and the whole family has great memories of “Fair”. The community supported the kids at the livestock auction and today Jim & Mary try to return the favor. When Jim and Mary’s six grandkids visit, they get to experience the same farm activities that their parents did growing up and “fair week” is back at the Carlson house. The kids all worked on the farm changing water and driving combine before they graduated from college.

Jim Carlson Farms has grown a variety of crops over the years including onions, grass seed, carrots and mint but seed potatoes are their main crop. Jim was on the Oregon Potato Commission for 12 years where he became involved in the political and marketing side of the potato industry. Jim and Mary traveled to Singapore and China in 2010 on a trade commission to promote potatoes in Asia. Jim also represented the Western region of the United States in Washington DC where he lobbied to include white potatoes in the WIC program and to increase foreign trade of potatoes into Mexico. Jim was awarded the Young Grower of the Year in 1990 from the Oregon Potato Commission and 23 years later the Seed Grower of the Year award from the National Potato Council in 2013.

Jim Carlson Farms continues to find innovative methods to improve and enhance their growing efforts. They have been able to raise and support their family through hard work and always strive to find ways to improve their farming endeavors. They are still committed to the promotion of potatoes and agriculture in Central Oregon and throughout the country.