Located in Oregon’s “high desert” country, Jefferson County boasts more than 250 days of sunshine and encompasses the communities of Madras, Culver, Metolius and the Warm Springs Indian Reservation. Established in 1914 from land that was once part of the expansive Crook County, Jefferson County is named for Mt. Jefferson. The peak is visible from much of the county and is Oregon’s second highest, reaching an elevation of 10,497 ft

Early farmers in the region used dry-land techniques, with wheat the preferred crop. Moisture shortages led to the ambitious North Unit Irrigation water project, completed in the mid-1940s. Today, a variety of crops are grown on 60,000 acres of irrigated land.

The area is known for its drier climate – cold, dry winters followed by warm, dry summers. Precipitation averages only 11″ per year. Soils are typically shallow, with 36″ or less to bedrock, and feature moderately well-drained to well-drained Madras loam over basalt or sandstone. 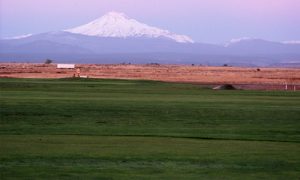