Alfalfa hay is produced in all three counties in Central Oregon, with alfalfa seed production primarily located in Jefferson County, although some fields are located in Crook County. Alfalfa is generally planted in the fall and typically lives for four to eight years, depending upon the climate. It is then replaced with a rotational crop. 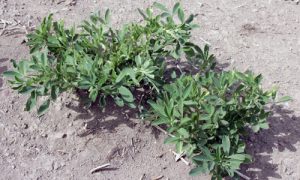 In most fields, alfalfa hay is cut three to four times per year, with the first cutting in the spring during the bud stage. Subsequent cuttings are made when the alfalfa is beginning to flower. On average, farmers can produce four short tons of hay per acre, but this varies depending upon the producer, their practices, irrigation and the weather. Alfalfa hay is primarily sold to dairies, due to the high protein content. 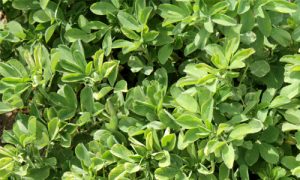 Alfalfa seed must be cross-pollinated to maintain high forage and seed yields. Leafcutter bees, alkali bees and honeybees are used to pollinate alfalfa seed fields Leafcutter bees are the favored choice in Central Oregon, as they are very efficient at pollinating alfalfa flowers, unlike honeybees. Leafcutter bees are unique in that they do not build colonies and are solitary bees. Alfalfa seed is harvested in the fall, usually in September once the majority of the seed is mature. The alfalfa is swathed and then allowed to dry in the field, which matures any green seeds. A combine then thrashes the seed from the pod and the seed is taken to the seed contractor for cleaning and processing.