Potatoes produced in Central Oregon are cultivated for seed potatoes, also known as tubers. Potato seed is grown primarily in Jefferson County, near Madras and Culver. The first known planting of potatoes in Oregon was in 1795, on an island in the Columbia River. That was followed by plantings at Fort Astoria and Fort Vancouver. Nearly 25% of all French fries exported from the U.S. come from Oregon, with potatoes accounting for more value-added production than any other crop grown in the state. 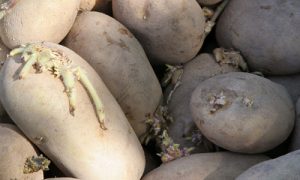 Potatoes are generally planted from late March to mid-June, depending upon the weather, elevation and soil moisture. The “seed potatoes” are cut into uniform pieces using a machine and are usually treated to help prevent infection and rot caused by bacteria and fungi. The cut pieces are planted. Prior to harvesting, irrigation is stopped and an herbicide is applied to kill the plant. 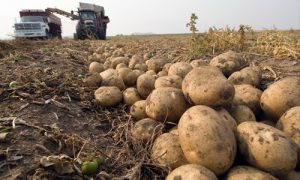 The potatoes are left in the field for approximately ten days to allow the skins to toughen, which prevents infection during storage. After the potatoes are mechanically dug up, they are stored in a climate controlled facility until they are planted. Harvest begins in July and can go through October, depending on the location and variety of potato. 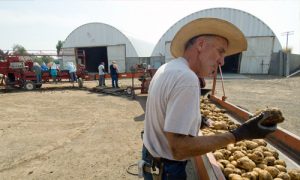