Commercial onion seed production in Central Oregon is concentrated in Jefferson County. It has the perfect climate for growing onion seed, as the seed requires cool winters and hot, dry summers. Onions are a cool-season biennial, which typically take two growing seasons to complete its lifecycle. Most onion seed is grown for producing onion hybrids, which require special consideration including choosing “parents” that bloom at the same time. Sometimes parents will be planted on separate dates to ensure a simultaneous bloom and pollination.

Seeds are planted from late July to September if using the seed-to-seed method and planted in September to October if using the bulb-to-seed method. In the right environmental conditions, an onion plant will form one or more flower inflorescences, which terminate in an umbel that contains several hundred seeds. The process of forming the inflorescences is called “bolting” and is undesirable for onions grown for bulbs, but essential in growing onion seed. For bolting to occur, the plant must go through a period of chilling (45-55 degrees F) for one month or longer, depending upon the variety. 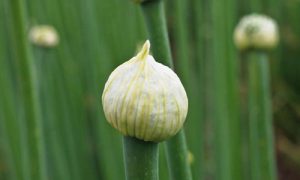 Onion seeds must be pollinated by flying insects, generally honeybees, so onion seed fields must be separated by a minimum of 1 1/2 miles to prevent cross-pollination. Seed maturity is reached by mid-June to August the following year, when the seed is harvested. The inflorescence is usually harvested by hand, with about six inches of the stalk left. They are transferred out of the field and dried on tarps for two to three weeks. After drying, the umbels are thrashed using combines and the seed is taken to a seed company for cleaning. 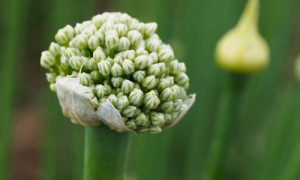