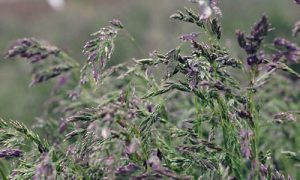 The Kentucky bluegrass seed grown locally is used for lawns and landscapes throughout the temperate regions of the U.S. and around the world. It is popular because it is an adaptable, long-living perennial that forms a medium textured, dark green turf with good leaf density and aggressive sod-forming rhizomes. Rough bluegrass is used in the southern U.S. for over-seeding warm season grasses like Bermuda grass, which go dormant and turn brown during the cool season. Rough bluegrass, generally mixed with ryegrass, helps maintain a lush green color through winter. While one of the most winter-hardy turf grasses, rough bluegrass has poor wearability in high-use areas and doesn’t tolerate drought or heat well.

Grass seed is grown under irrigation in the Madras and Culver areas. It is planted from mid to late August. Central Oregon’s warm, dry summer weather provides excellent conditions for seed harvest, which begins the first part of July. The grass is swathed into windrows and allowed to dry seven to ten days. Swathing too early prevents seeds from reaching maturity. Swathing too late causes the seeds to shatter. Once the windrows reach the correct moisture content, they are combined, which separates the seed from the stalk. The seed is transported to a seed contractor for cleaning and the leftover stalk is usually baled and sold as grass hay.

Oregon State University administers a seed certification program for some grass seed fields, ensuring the quality of seed production and cleaning. Field inspections are conducted in the spring and samples are taken after the seed has been cleaned to verify that growing and processing procedures maintain the genetic identity specific to each grass variety. Only registered or foundation seed can be planted in fields enrolled in the program. A large amount of the Kentucky bluegrass produced in Central Oregon is grown under the seed certification program. 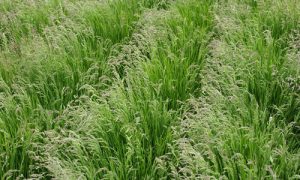