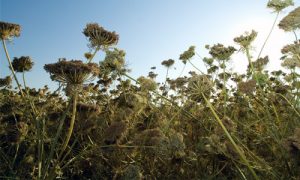 The production area, situated at an elevation of 2,000 to 2,500 feet, creates favorable conditions for carrot and other seed production. Rainfall and humidity are low. Nighttime temperatures are cool and summer day temperatures are moderate. The area is also absent of wild carrot, which can cross-pollinate seeds and contaminate the crop. 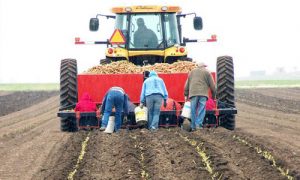 Seed carrots are grown in shallow, well-drained soil and are either grown from seed planted in August or from roots, called stecklings, planted in the spring. Most of the carrot seed is hybrid, with male and female plants that cross-pollinate through honeybees to increase seed vigor. Slightly more than half of the acres are irrigated by sprinkler, the rest by furrow or drip systems. Production on rolling terrain was limited until the introduction of drip irrigation. Drip systems provide adequate water, without runoff and erosion.

The male plants are knocked down prior to harvest of the females, which usually occurs in September. Harvesting carrot seed can be challenging because of the three different umbel orders. The primary/king umbel matures first, followed by the secondary umbel, then the tertiary umbel. Carrot fields are swathed when the primary and secondary umbels have browned, but before the tertiary umbels have matured. The swathed rows are dried for three to ten days before they are combined. The seed is then trucked to a seed contractor, which cleans the seed to remove spines and other particles. 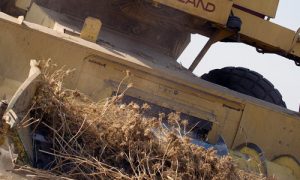 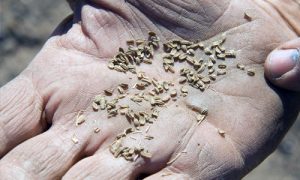