Oregon leads the U.S. in peppermint production, growing nearly 35% of the national total. Production has remained stable over the past few decades, but the location where peppermint is grown has shifted from the Willamette Valley to Central and Eastern Oregon. In Central Oregon, most acres of peppermint are in Jefferson County, with some acres also grown in Crook County. The peppermint grown in Central Oregon is distilled to extract the oil. 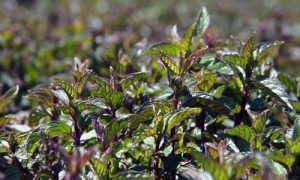 Peppermint is planted either in the late fall or in the spring, using special mechanical planters. Because mint is a perennial that does not produce seed, it is planted using stolons (rootstock). Mint stolons are taken from existing fields and then planted within a few days. Fields of mint are generally left in production for three to five years and then replaced with another rotational crop.

Mint is harvested from late June to mid-August. Maximum oil yield is highly dependent upon environmental conditions. Warm, sunny days increase the amount of oil, which is stored in glands on the underside of the leaves. Optimum oil yield and quality is attained when 10% of the peppermint crop is in full bloom. It is cut and windrowed much like hay, then dried in the field for several days before it is collected for distillation. At the distillery, oil is extracted from the leaves. 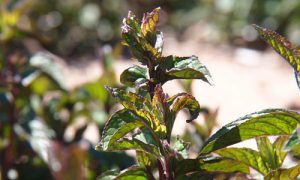